Freshdesk Webhooks in observer not working

started a topic about 4 years ago

OK - there's nothing else I can test.

Trying to trigger a webhook in Freshdesk via observer.

- I can use the Freshdesk API without problem via cURL. Was able to update ticket etc, to test my calls without issue.

- I can trigger a webhook to a DIFFERENT platform via my observer rule, and the payload I set gets passed over just fine.

- I've tried BOTH the new and old API

- I've tried authentication via username/password AND via API key

I'm wondering if it's something to do with the authentication, because this is the only piece I can't test. I can't see the error messages it's throwing, so I have no idea how else to test.


This is one of the half dozen permutations I tried: 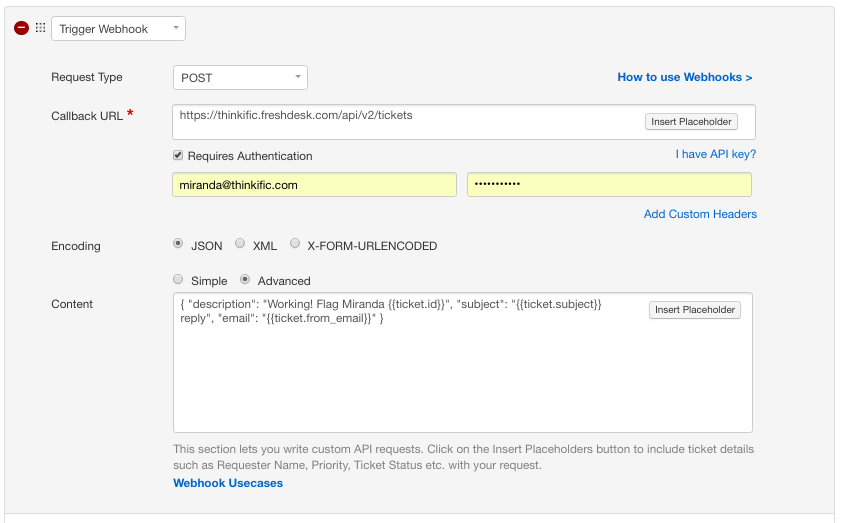 Admin
said about 4 years ago

There could be a chance that your request payload might miss some mandatory fields. If you haven't changed the default configuration of ticket fields then status and priority fields are mandatory in tickets which are missing in your payload that could possibly cause an error.

Could you please try similar payload using curl and check if it is returning back successful response?

I'm having a similar problem at the moment, tried very similar but doesn't seem to be working.

said over 3 years ago

I've Tried to add a webhook to call my sms api url trigger on ticket closure , but doesn't seems to work.