With the Freshdesk iOS app, you can keep an eye on tweets, convert them to tickets, respond to conversations and track what people are saying about your competitors and industry, besides just your own company. You can begin by logging in to your help desk on the web, going to the Social tab, and connecting your company's Twitter account.

For every Twitter account you create, a default stream will show up listing mentions for that account. You can configure additional streams to track influencers, and specific kinds of tweets you get. 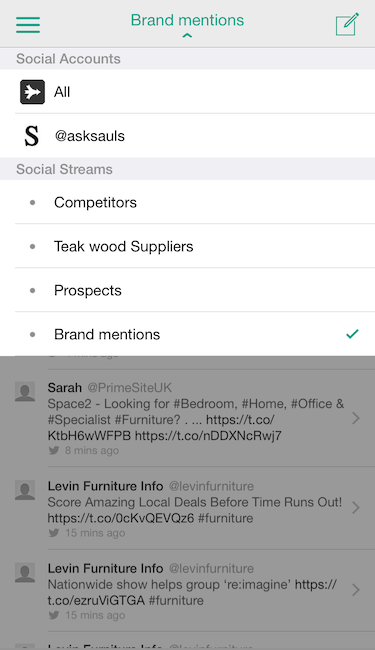 Interacting with tweets from the iOS app

The Social Tab provides quick access to all the streams you've set up, and allows you to interact and take actions on tweets. You can use the menu on top to switch between streams you've created. Once you choose a stream, a timeline of tweets that match the conditions you've set up appear.

If you've used Twitter, the interface here should be familiar: you'll see matching tweets listed in reverse chronological order, along with the name of the author, the username, and the timestamp.

On swiping across a tweet, you'll see the following options show up:

Indicators on tweets
Based on interactions and activity, you'll see one or more of these icons appear alongside tweets listed in streams:

When you tap on a tweet, you'll be able to see interactions that have occurred on that tweet. Replies that have been sent from the app or the web help desk will have the name of the agent who sent the reply alongside. You'll also be able to access similar options just like on the previous screen from the interactions tab (convert or view on select tickets, reply, favorite and retweet).

When you're browsing through streams, you can also use the new tweet icon on the top left to post a message on your Twitter channel. When you tap this button, you'll be able to switch between accounts if you have more than one Twitter profile connected to your help desk.

Next: Viewing and editing contact and company fields in the iOS app