Time Triggers based on custom statuses

Custom statuses help you keep track of tickets that are pending for different reasons. With time triggers, you can automate tasks based on how long a ticket has been in a custom status. This means that you can automate every aspect of your workflow and never stress again about missing out on a pending task.

In this article, we’ll look at

Some things you can do with this feature

Follow-up with customers proactively- Sometimes, your customers may forget to get back to you when you’ve requested for more information from them. With this feature, automations can follow-up after a day or two of a ticket waiting on a customer.

Tickets with dependencies can be brought to the attention of the right people before it gets too late. As an example, an eCommerce company that requires the help of the billing team would use a status called “ awaiting billing team’s inputs”.  Automation rules can remind the billing team if a ticket has been pending on them for too long, and escalate the ticket if it breaches your internal SLA with them. You can ensure that no customer gets a late response because of dependencies between teams.

Automations can now tag tickets that have been in a custom status for too long. By tagging tickets that aren’t responded to on time, you get to quantify your delays and be armed with the data you need to figure out where your process gets clogged.

How to set it up

Let’s take an example of an eCommerce company that uses a status called “ awaiting billing team’s inputs”. An automation rule to remind the billing team if a ticket is pending in the same team for over 48 hours would look like this. 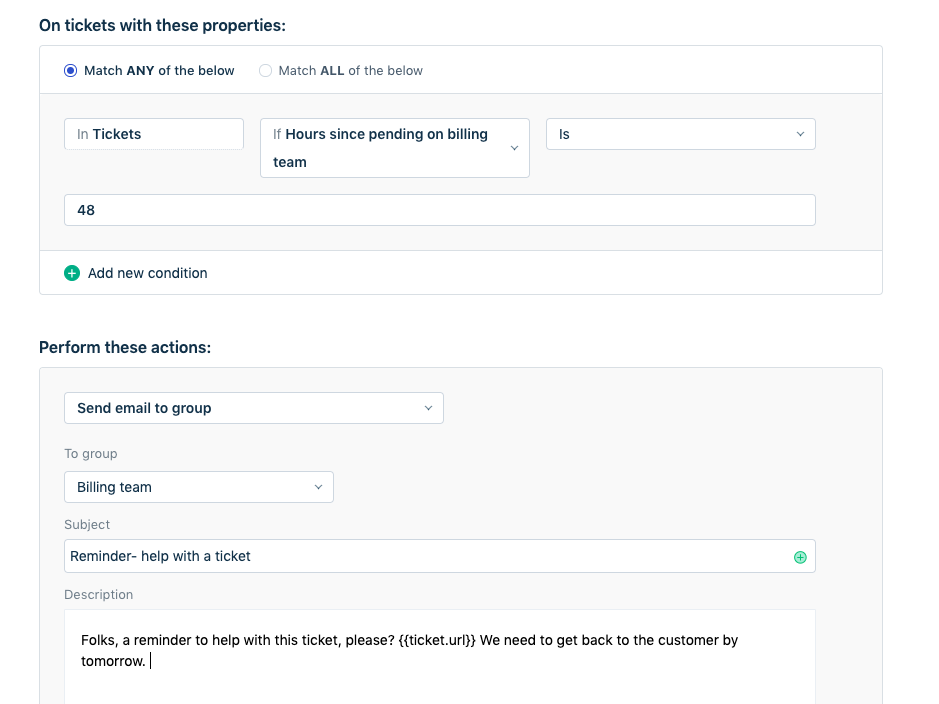 This way, the support team can ensure that no billing issue slips through the cracks because of their dependency on the billing team.